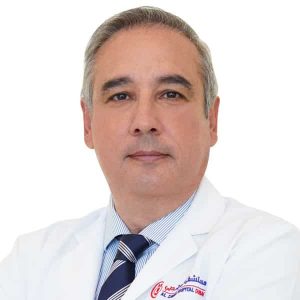 Consultant Pediatrician
Dr. Carlos Sanchez, Consultant Pediatrician, completed his bachelor’s degree in Medicine in 1992, with an extraordinary award for his qualifications. After completing his studies and receiving his medical degree, he worked for one year in the Spanish armed forces as a 2nd Lieutenant Doctor. Additionally, he did his Fellowship in Pediatrics from 1995 to 1998 in Cadiz University Hospital along with a Pediatric Allergies Fellowship from University Hospital “La Fe” in Valencia and learned about molecular techniques applied in allergy for 3 months in St Thomas Hospital, London.
Request an Appointment

During his first years as a doctor, he was a Consultant Pediatrician in Spain, and was later appointed as the Head of Pediatric Allergy Department at the University Hospital of Cádiz in Southern Spain. He then developed the first pediatric allergy unit and began to carry out desensitization techniques in children with food allergies, especially cow’s milk and hen´s eggs, managing to cure cow’s milk allergy for 150 children and egg allergy for 50 children. These techniques are currently widely used in Spanish hospitals with a 90% chance of cure.

Among his publications, he has written more than 25 articles in multiple medical journals, book chapters and has been invited to give lectures around the world, in addition to being part of several editorial committees of scientific magazines.

We use cookies on our website to give you the most relevant experience by remembering your preferences and repeat visits. By clicking “Accept All”, you consent to the use of ALL the cookies. However, you may visit "Cookie Settings" to provide a controlled consent.
Cookie SettingsAccept All
Manage consent